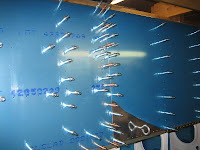 I match drilled the tank to the outer leading edge using a #30 pilot.  There is a strip of aluminum between the tank (left side of pic) and leading edge (Right side of pic) that connects the two together.  Eventually these holes get widened to a #19 to accept the tank attach screws.  The tank rests perfectly on the Z-Brackets and with clecos through the spar into the nutplates, it holds the assembly down tight.  With the tank snug up against the leading edge and the aluminum strip underneath, I used the pre-punched holes as a guide and drilled away.  The copper color clecos in the photo are in the holes drilled by this step. 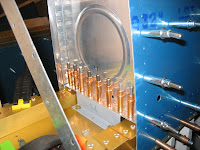 If you remember a few posts ago I talked about Dan Checkoway's method for drilling the Z-Brackets.  Here is where it comes into play.  I drilled and cleco'd the root end rib to the Z-Bracket.  Using a #30 drill.  Using Cleco's in every hole ensures no movement as I move to the next step.  The outer holes first to center the tank, since they are prepunched. 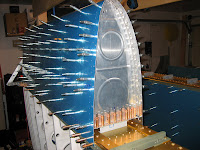 With the tank secured to the root Z bracket and spar, I then removed the leading edge which exposes the outward most Z-Bracket for drilling.  The leading edge will be deburred, dimpled, primed and riveted before it goes on the wing again.

A cleco in every hole on the outer Z Bracket secures the baffle, then the tank skin and inner ribs can be removed exposing the baffle perfectly located for using the prepunched holes to drill all the remaining Z Brackets.   Use a drill stop here to protect the spar. 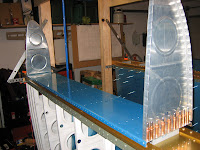 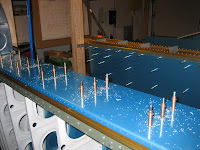