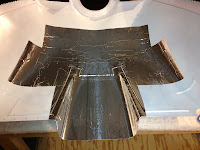 With the lower cowl now about 90% done I decided it was time to put the heat shield in place.  This is an aluminum heat reflective stick on material that protects where the exhaust runs close to the cowl.  It goes on pretty good, seems to stick really well and hopefully will do the job to protect the cowl.

I might have covered more area than necessary, but this stuff is light and will also work to keep oil off the cowl, which is a good side benefit.

Posted by Chad and Bekah at 9:45 AM No comments:

Is this really the final skin ?

I am still in the middle of sanding my lower cowl, but that should be complete shortly after 3 iterations of squeegeeing epoxy and sanding to remove the pinholes.   I might wait for a while to prime it since the weather outside is getting a bit chilly these days.  So in the meantime,  I decided it was time to start riveting on my final skin.  My plan here is to get the inner portion riveted and leave the outer pieces open so I can reach in and continue to work if necessary on the insides.   This will allow me to final fit the canopy which is really all that is left before I move to the airport.  I still need to work the canopy faring which will take a few weeks and I will outline the process in a few days.  Before I started riveting, I took lots of photos and double checked everything behind the sub panel.  Also, documented my ground block connections and fuses etc..

This was some of the hardest riveting to date.  I had to put the canopy pin retainer mechanism in place and let tit bounce around a bit and move out of the way so I could get some of the more difficult rivets.  I also put some pro-seal on both sides, the firewall side to keep out the CO, and the canopy fairing side so that it would keep water from coming in behind the sub panel.  Getting my hands through the lightening holes was a bit difficult with all the wiring, but doable. 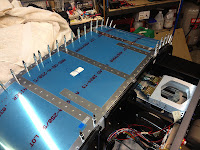 Posted by Chad and Bekah at 9:32 PM No comments: 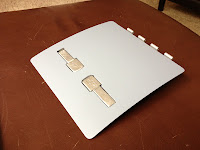 The last couple weeks I have been working on the cowl and the oil door.  Basically the cowl comes Pink and fairly smooth, but very porous as well.    If you just paint it, there are huge pinholes in your paint due to the lay of the fiberglass and honeycomb sections of the cowl.  There is no real easy way to fix this, but I do want to have some primer on the cowl to protect from UV and also want to remove the rough existing surface which can collect oil and dirt really easy between now and when it is painted.   So to avoid this I am working on the surface of the cowl.  Here is my process: 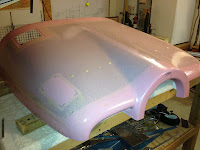 First sand the cowl to smoothen it out and open up any holes that might be covered..  Wash with dawn, then rub down with towel and after its dry use some acetone.   Then take some mixed epoxy and a squeegee, then pour the epoxy on the cowl and squeegee it around.   Getting it as thin as possible, while letting the epoxy fill the divots on the cowl.  In the end, the first time you do this used the most epoxy because it is basically absorbed into the cowl.   Before the epoxy has fully cured, i.e. is still tacky, I put another layer on..  This requires less epoxy, but is a bit harder because it is more difficult to tell where the epoxy is new vs. old.  Anyway, I got another layer on and let it dry. 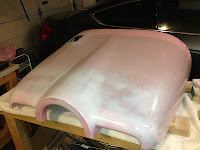 Then couple days later I sanded it for 2 hours using 80 grit..   Then I used a bit of white rattle can primer to see how it was looking.   Pretty good, only some areas that were major holes still existed.   So I sanded away the primer, cleaned up the cowl like above and did the epoxy treatment again.  This time, it really went on smooth and a glossy finish of epoxy..   Two coats just like above and then sanded again with 80 for a couple hours.  Then went with 150 for an hour or so, then finally with some 220 for another hour.   Looks really smooth now and ready for Primer.  I don’t expect to see any pinholes but just a smooth primed surface.  I am going to use my PPG Two part epoxy white primer which will seal and protect until I get final paint.  Oh, then I need to do the lower cowl, since I have only been working on the upper half.   ;-)

Actually, I wanted to throw a photo in of the now finished upper cowl.  Looks like the additional work seems to have payed off.   No pin holes, and looks very smooth..   I will be happy flying around with this until I can get it professionally painted.. 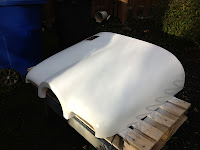 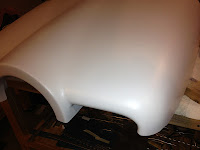 Back to the Cowl.. Time to get rid of the Pink.. 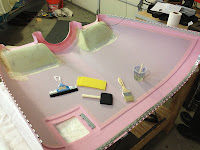 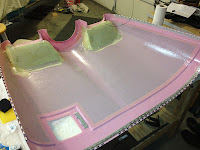 I decided it was time to do something with that crazy pink cowl shipped from Vans.  It will take a while, but I am finally getting rid of the pink.  First step was on the inside of the upper cowl.  I started by sanding for an hour or so to make sure the surface was clean and smooth.  Then sprayed with hose and washed with soap to clean it up, then to seal the surface I used a thin coat of standard west systems epoxy.  Started with a brush and realized it was going on way too think, so a hard plastic squeegee did the trick and made the epoxy go really far.   I covered the entire inside with a small cup of the stuff.   Let it dry overnight in the cool garage so this morning it was dry to touch, but not fully cured..  Perfect time to hit it with some heat resistant white paint..  Since the interior of the cowl isn't critical I originally used Rustoleum heat resistant paint, but the surface came out chalky and I figured it wouldn't hold up to oil, so I got a heat resistant engine enamel from the auto-parts store and it worked great.  The surface is White so that I will be able to  see any grease/oil problems and it is now sealed so that nothing soaks into the cowl.    After this, I will probably do the lower interior before attempting anything on the exterior of the cowl.  Might as well get through the learning curve on the less visible inside. 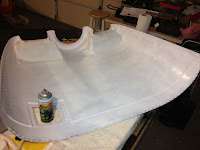 Posted by Chad and Bekah at 8:45 AM No comments: