Trying to liberate a few extra cleco's for the tank assembly, I figured it was time to assemble at least the left leading edge.  It was already drilled when in assembly, so I had to debur sides and holes, as well as dimple and prime.  This all went rather quick except for forgetting to bend the edges in prior to dimpling. . . . . . .   Where the edges of the skin touch the spar; if you don't bend them in, they tend to stand off abit when final riveted.  I was able to use hand seamers and gently bend the edges in after dimpling and think it will turn out OK when final assembled.  Next time I won't make this bonehead mistake..

Also, for primer I used rattle can self etching on the skin.  Just scotchbriting the area where the ribs touch the skin and leaving the alclad clean and shiny everywhere else, I cleaned and prepped with acetone and primed away.   Spraying heavier where the ribs touch the skin and just a light spray over the center alclad skin.  The alclad has some corosion preventative properties on its own, with a thin film of primer of it, we should have no corrosion here.

Below is a pic of the deburred, dimpled and cleaned up ribs ready to go onto the primed leading edge skin.  Tomorow I talk Rebekah into some Riveting Action ! 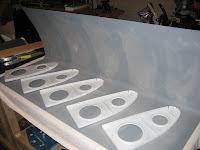