Engine choice is a major decision as part of building an airplane.  Its really one of the most expensive and most important parts of the finished airplane.  For RV-7's the engine pretty much has to be the Lycoming style 4 cylinder engine.  There are many options that the builder must determine though starting with Horsepower..   ;-)   Also, ignition type, aspiration type, injection, sump type, etc..    I won't go into all the details, but I chose to buy new, non-certified.  Basically built the same as certified, but less government mandated paperwork, so it is less expensive.   Realistically there probably isn't any safety difference either, and the engine is warranted for 3 years which isn't typically the case with a new certified Lycoming..

The engine I ordered is about the highest end engine for the RV, outside of the 390's or the 200 hp angle valved engines.   Its a high end, high horsepower (195 hp), mid sized (360 sized) engine..  With this engine and prop combination that I am going with, as quoted by Larry Vetterman, I won't be "tail end Charlie"...

I chose to go through Aero Sport Power up in Canada.. They go a great job and have many good recommendations..  Plus I met the owners Bart and Sue both at Arlington fly in and Oshkosh fly in last summer..

A final thing to consider is fuel..  Avgas is 100LL and there may be changes to this over the next few years..  The engine I bought has low compression cylinders which allow for lower octane fuel such as premium auto fuel.. (but it can't use ethanol)..   So with this engine I should be safe with what ever future fuel is used for aviation engines..

Below are the Specs:

Here is a pic of one of their recent engines..   Mine will be Yellow where this one is Red, plus this one has two mags where mine will have one mag and one lightspeed electric ignition, also mine will be fuel injected.  But in general it will look like this one. 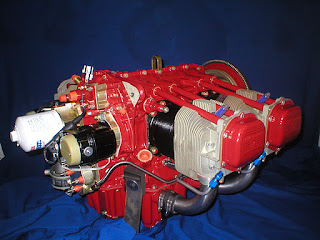