Today it was about 80 degrees in Seattle, so I decided to take my first few steps on the canopy.  Directions tell you to draw a center-line down the canopy on the protective covering..  Good luck with that.  There is no real way to tell what is center, so I measured from about 20 different places and did the best I could..  Using the very edges, as well as the edges of the tooling marks..  I think I got it..   Then it was time to pull back the plastic and tape it up to make the first few cuts.   Initially you are supposed to remove the tooling marks along all 4 sides.  I only worked the front and the back today, to get a feel for how to cut this plexigas stuff.  I used the disk supplied with the kit and my die grinder.  It cut fairly slow and I think if I had 3/8 inch air line vs. the 1/4 inch I could get more power to my grinder, but I was able to get through it working slow.  Glad they tell you to practice on these first few cuts because there is a learning curve to cutting this stuff.  Do it first when it is hot outside, Then focus on the front of the disk and the back while cutting.  Keep it from binding and move slowly.  Tape up the cut line as you go so that the pieces to start to get floppy and use both hands because the grinder bounces around a bit.  Here is the first cut. 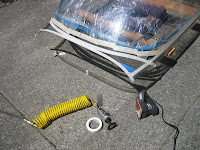 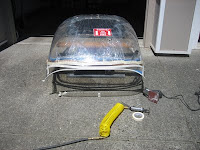 Also, I think next time I will use my respirator vs my dust mask. The smell of that burning plexi is nasty and my sinuses were effected all day.  Use really big protective eye wear because the bits of plastic are hot and there are tons of them, they burn a bit when they get in your eyes.  Cuts 3 and 4 I decided to start taking of the forward corners..  Then for Cut 4 I took off the tooling marks in the back. 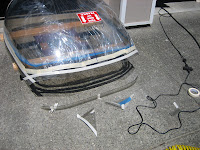 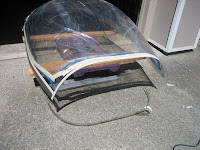 After cutting and before moving the canopy I used a orbiting sander with 80 grit sandpaper and it cleaned up the edge really nicely.  That was the only part that worked better or was easier than I thought it was going to be..  ;-)   Anyway, I got through my first cuts and the canopy sits a bit better on the fuse now... 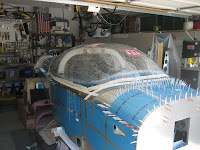 Posted by Chad and Bekah at 5:22 AM No comments:

Since I haven’t been able to get enough time to start cutting on the canopy, I have moved forward a bit out of sequence so that I can at least continue moving.  Hopefully I won’t get myself in trouble doing this, but I went ahead and fabricated the rear strut mounts and drilled them to the canopy side rails.  Glad I got these done now because I can get them prepped and painted as the canopy frame continues to come together.  Also,  These buggers are hard as heck to bolt onto these rails..  You need to get back there with a wrench which is not easy..  Also, you must have a 11/32nds combination wrench to do it.   I didn’t have one, so needed to pick one up specifically for this job..  I want to take these off one more time for final finish, then get them bolted on forever.. 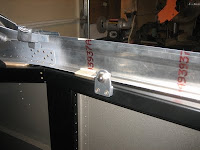 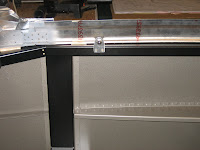 Also, I figured since I wasn't going to be working inside the plane I would set my covers and seat floors in place to get a good look how the interior is coming together.  Minus the carpets and leather seats, it is pretty much complete and I am really liking the way it is coming out..  Check out the photos…. 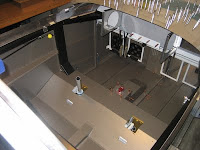 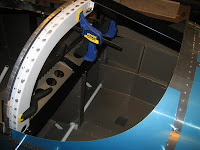 Posted by Chad and Bekah at 9:32 AM No comments:

Cutting the Canopy is the next piece of work and it is huge..  I won't have a lot of bulk time to spend for a while, plus the weather needs to get hot before I start cutting the Plexi..  Also, Seattle is the coldest place on the planet right now so in the meantime I am working on some other misc items..  The good news is I borrowed some Plexi bits from a fellow builder and am practicing on plexi-glass in the meantime, so I should be ready to roll when I get a chance to take a crack at the canopy..

So I have been able to finish the forward latch assembly completely.  It turned out great..  With the UMHV tape in between the angles, there is no scratching on the actuator..  The action is smooth and efficient.   Plus I drilled a hole in the exterior portion of the arm, and can use a mini paddle lock to lock up the RV.  Many builders do this since there is no doors on the plane.  (Even though the novice wouldn't even know how to open the latch anyway..  Best to have some sort of deterrent to keep people honest) 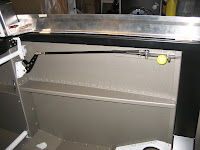 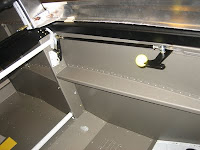 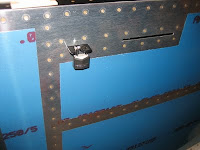 I also worked on the canopy security latch mod, by adding a spring to the mechanism, this will pull the latch up and keep it from twisting accidentally when nobody is inside the plane.  If it twists, it could lock the canopy shut with no way to ever open it up again from the outside..  This will save me from that headache.. 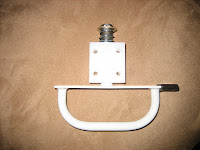 Also, I painted and finished up the Doug Bell tail wheel for and greased up the whole assembly.  Its beautiful and I can't wait to get the plane rolling around sometime soon..  Probably next year.  ;-) 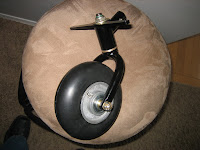 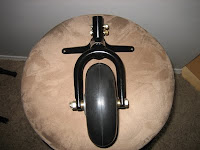 These canopy frame shims are easy for some, but for me they were quite difficult..   I don’t have a belt sander, and filing these puppies was just a horrible experience.   I borrowed the use of a fellow builders sander and ended up with some really great shims..   Finally got them in place by talking the frame off the fuselage and got them drilled..  Turned out Great, sorry for the fuzzy pictures.. 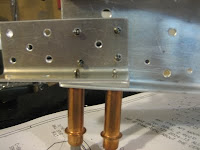 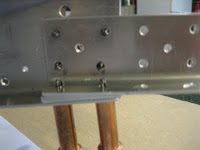 Then I went ahead and riveted the frame sides and am edging ever closer to getting out that big plastic bubble and starting to cut it up..  Note that there is a funny pre-punched hole in the skin that many builders don't know what to do with since it falls so close to where the plans have you drill on of the holes used to connect the sides to the front frame.  In this case, I used the hole as a guide, so one of the 10 side rivets is slightly off as you can see and I am leaving it open (clecoed) for now, because down the road, I am hoping to use it as a rivet to hold the skin down.   Other builders have added additional rivets for this purpose, I am just trying to be efficient.  We'll see if it works out. 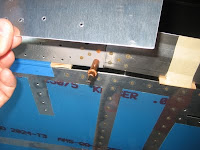 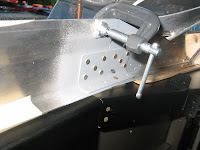 Posted by Chad and Bekah at 9:19 AM No comments: 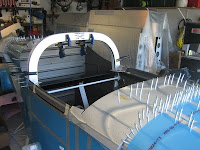 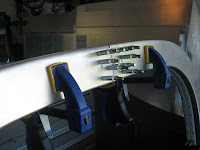 This weekend I took a deep look at the canopy frame assembly.  This is the foundation for the entire canopy and is a large part with lots of interrelated components.  It seems that work you do now will impact pieces and their fit down the road quite a bit.  So basically you need to get everything in process and continue looking forward and back throughout the construction of the whole canopy.   To start I put up the canopy bow against the roll bar using the 4 blocks for spacing that Vans recommends.  Then I used 1/8th inch spacers on the side frame pieces to ensure appropriate position.  Once situated, I started drilling the parts.   Its funny, on the canopy when fitting the parts, I think you work from the front to the back, then from the back to the front and meet up somewhere in the middle with a good fit.   Then you drill holes one size twoo small and don't rivet them until much later to make sure you have really the right fit.   I started drilling to 3/32 then enlarged some of them to 1/8th.   Hopefully I didn't enlarge them too soon.   I lined everything up as precise as I could, so we will see what happens when the canopy is finally fit.. 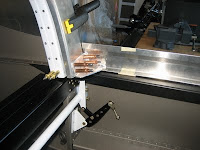 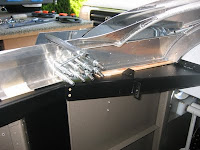 Then since I didn't really have a good plan for what to do next I skipped forward a few pages and started on the canopy strut mounts.  These guys were fun to make, drilling holes and tapping out for the posts that hold the struts..  This will just get me further ahead when I get to that point.   Oh, and I also drilled them to the canopy frame.   I hope I didn't do this too early, but I figure now I have a match hole to use to drill the skin and enlarge to the #10 screw when the time is right.   We'll see. 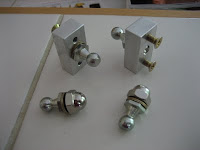