I was able to test fit the Capacitive Senders for both tanks.  These guys are the way to go if you want a flop tube since there is no float to get in the way in the fuel pick up bay in the wing.  Those who use flop tubes need to relocate their float into the second bay where it needs to come in from the rear through the baffle if that makes sense.

The capacitive senders are separated from the aluminum tank with UMAH washers that allow the electrical single to be measured through the gasoline.  More gas more signal, so the fuel guages are pretty accurate with this method.  Of course they have their own challenges upon install.   Per the instructions I cut back where they interfered with the bottom skin stiffeners on the outer bay ( you can see this in the right pic).  Sorry the pics are so bright, that is some reflective aluminum with the flash.  There are two capacitive plates in each tank, and everything is test fit in both tanks. 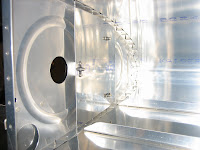 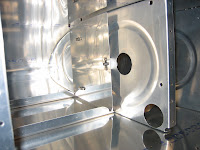