1) At this point I really can work on plenty of various items.  There are no clear directions for this part of the build, and since I am waiting for my engine, prop/governor, and exhaust I really can't go any further on the firewall forward, so I thought its time to work a bit on the Panel.

2) Also, Sometimes in building, you are really worried about moving forward since you don’t have the path completely figured out.  For me it has happened a few times and now I am in the same boat with the Panel.   I do know what I want and want to get going, but don’t have all the components yet.  So considering the risk I took the chance and went for it.   Hopefully this work won’t need to be repeated, but a new panel blank is only 40 bucks or so from Van’s so if I need to do it again at least that is an option. 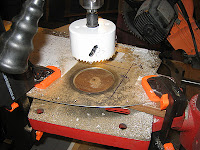 So for now, I started cutting where the Gemini will go using a 3 1/8 inch hole saw which worked great.  I wanted to use a panel punch since this will be a visible cut.   At high speed and clamping everything down, the hole saw left an amazing cut.   Looking good so far, I went ahead and started punching 15/32nd holes for the switches.  My panel is going to be as effective as I can make it, yet as simple as possible.  Also added the parking brake in an area of the panel where it can be easily released from standing outside the aircraft, also the 10 amp non-switched power point. 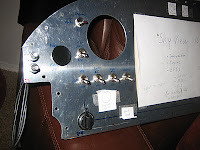 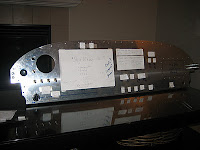 Right now I can’t start cutting holes for the Skyview and the 650, but I had already started the map box, so I continued with it.  Almost finishing the map box, which has some very critical points to it, but they all came out fairly well and I am happy with it.  Don't mind the scratches, the panel is thick and they will be all buffed out, then it will be coated with some thick paint or powder coat..  Its gonna look nice.  ;-) 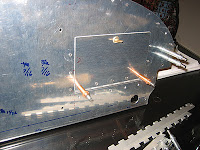 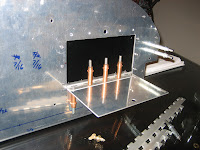 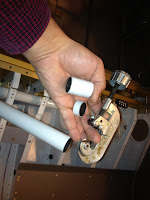 While I wait for the engine I decided it was a good time to tackle the pilot stick grip.  I went with the Ray Allen G207..  This stick has 7 switches that I will be using as follows:

I love the look of this stick grip, but wiring it was a pain.  First off I wired as indicated in the G207 instructions, if you use a VP-X, you can't wire it like this, so I had to rewire part of it.  Also, the terminals need to be soldered and they are extremely small which adds to the complexity. 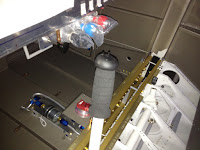 I temporarily added the engine control bracket to get a feel for where the stick was going to be.  I ended up cutting off just about 2 inches off the pilot stick..  The top of the Ray Allen adds about 1.5 inches, so I am now about .5 inch shorter than Van's supplied stick.   I still may take off another 1/2 inch or so, but need to research it a bit.   I can always come back later and shorten it with the pipe cutter.

Sorry for the blurry pics, I have been using my I-Phone 4S but its not as great at point and click as they say..  So soon it will be back to the cannon for me.

Update:   Here is some additional work on the wiring down through the stick.   I will join this in with a d-sub connector, or just additional pins and heat shrink..  Depending on what best fits the run of the wire when complete.   Also, this pic was taken with the Cannon, much better quality. 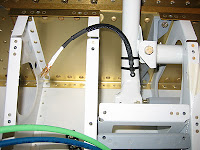 Posted by Chad and Bekah at 9:02 AM No comments:

I have done a few odds and ends lately that I won’t list, but the standout progress is on the fuel lines and electrical.  First off, I think I am finished with all my tube bending and flaring that needs to happen on the fuel lines !  Yay !  Basically from each wing tank, through the fuse, through the fuel selector, through the fuel pump, and now along the floor to the Firewall, I have now connected everything.   This 3/8 inch tube is tough to work with so am glad it is done, I just hope I don’t have to rework anything down the road.  It’s funny, because almost each piece along the run I had to make a couple times, meaning there is just as much tube in my trash can as in my airplane.  Good thing it isn’t that expensive.  Also, I have borrowed my tube bending and flaring tools from a fellow builder.  Time to give them back to him for good ! 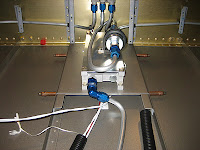 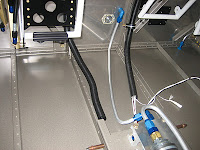 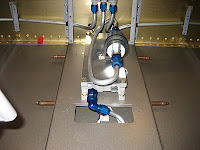 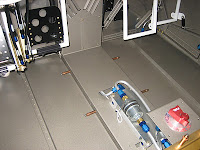 I also ran conduit from under the floor cover, up the firewall.   I chose to do it on both sides since I will have quite a bit of electrical wires that will be involved.   So now, it’s pretty simple to run wires up through there and also looks good with the other black components in the cockpit.  Having this complete I am almost to the point where I can rivet the firewall recess..  This will need to be done before the engine is hung.

Over the last few days I worked through a couple options on the brakes.  I think I decided on this as my final solution.  Basically I used the stainless wrapped flexible lines that Vans supplied with the kit.  These originally were meant to be used at the brake pedals themselves, but I ordered black lines from Bonaco for better look and improved performance.  With these leftovers, I was able to bypass the requirement to create a loop around the axle with the hard tube.  The loop is designed to allow flex and keep it from braking.  This works fine, but the only problem is every time you replace brake pads you need to bend the metal tube.  With this set up, the flexible tube will allow the caliper to move around no problem during service and via a brake pad replacement.  The good news is I used the tube from Vans, so didn’t have to order any new.  Win Win if you ask me.  At this point nothing is torqued, but I have my break system complete ! 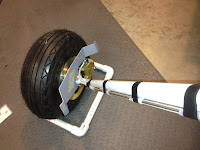 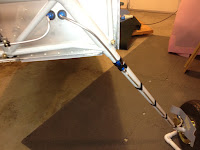 Also, I worked on my initial power wiring.   I took a #6 AWG from the master relay to the VP-X.   All power will run through this wire.  I also took a #8 and ran it up to a battery bus which will power the below:

#8 AWG for this might be a bit heavy of wire, but I had the wire and it is a very short run, so no weight issues.  For the 20-30 amp VP-X Bypass I will be using #12 most likely.  The VP-X bypass will be an interesting circuit.  Basically I will pick a few key items that will be backed up by this bus.   They need to be backed up in case the Battery Switch, Master Relay, VP-X Itself, Wiring between switch and relay, or wiring between relay and VP-X, fail.   Also, for those familiar this will function like an endurance bus if the alternator fails.

In general, this will enable fully separate fused power circuits so the below items can be run off a single switch directly to the battery.   Individual Diodes will be in line for each circuit so it won’t back feed the rest of the electrical system.


Skyview will not be on this switch since it has an internal battery backup. 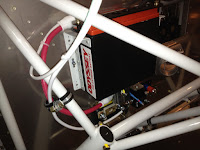 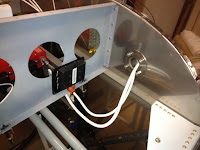 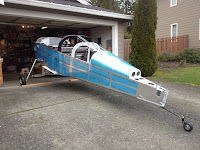 This weekend was a huge weekend for the project.  I finished up all the misc items on the firewall, mounted and torqued the engine mount, worked on the wheels and brakes, then finally put the plane up on its gear.  I will say that working with the brakes and wheels wasn’t at all straight forward and I was a little surprised with how difficult it ended up.  I got through it though and things are looking good.   I will need to remove the wheels to final torque the brakes though, and probably repack the bearings, but for now she is mobile..  The plane is definitely a lot taller than I though it would be.   Looks huge in my garage ! 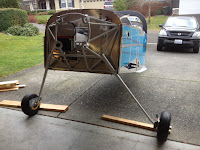 First thing I did was remove the bottom hinge from the firewall, which I replaced with a plate..  I am planning on using screws or camlocs for the underside of the cowling due to many builders having the hinges loose eyelets, I don’t have a good picture of the plate, but I am sure down the road a good one will show up.   I also started working on the wheel pant mounting flange which connects through the break assembly.   I had to remove quite a bit of material to allow the brake pins to fit past the flange.  Also, I would recommend doing a complete wheel install before the gear is on the plane.  Right down to drilling the retaining nut hole through the axle..  This was a bit hard to do while the gear was on the plane. 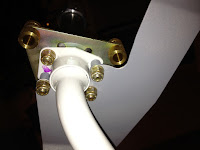 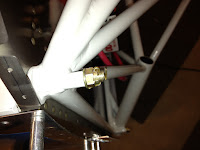 Mounting the gear was a no brainer, just had to wrestle with the engine mount a bit first and then carefully line up the hole so I could drill out the undersized hole in the engine mount.  The rear hole is slightly undersized so that you can get a really smooth fit for the single bolt that holds on the landing gear..  Yes only one bolt per side holds these puppies on..

The tail wheel was piece of cake since I had pretty much finished it months ago.  Sorry for lack of photos and description.  There was a lot more work to this than I show here, I just wanted to get through with it and am now glad its done.
Posted by Chad and Bekah at 8:14 PM No comments:

Its been a busy week on the plane, I am trying to get everything ready to torque the engine mount for good and get it up on its landing gear.  Part of the problem is that the cowl is secured by the hinges you see in the photos below, but these can't be riveted to the firewall when the engine mount is on.  So its good to do this earlier than indicated in the instructions.  Also, you are taking a bit of a chance doing this since you can't measure them exactly, but I left part of them free so that I can trim the upper section if necessary.   Also, I am going to redo the lower hinges, I will replace them with a plate and use camlocs to secure the bottom of the lower cowl.  The hinges work great, but due to high vibrations in this area, some builders loose some eyelets on the hinges and end up replacing them anyway. 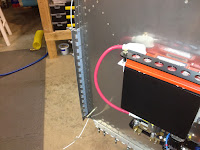 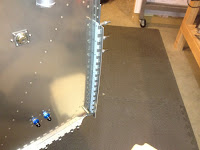 Onto the VP-X..  I got the VP-X Pro which is a dual bus Electronic circuit breaker system.  These units are amazing and kind of act as a brain box for the electrical system.  Everything plugs into it and it allows for tons of cool functionality that will be covered in future posts.  The big thing is that it replaces all my circuit breakers electronically, so I will only have a few back up ones that I have to install.   Now the VP-X itself is a single point of failure, so I will be backing it up with a separate bus powering a few essential systems, but will go into that later. 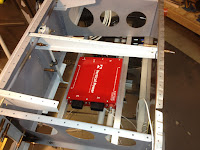 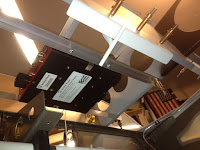 Posted by Chad and Bekah at 9:35 PM No comments: