Almost finished with the Z Brackets. Both Wing's brackets are now primed and the nutplates are installed on the 6 inboard brackets. I have temporarily mounted them so that I can mount the tank and back drill the surface of the Bracket. 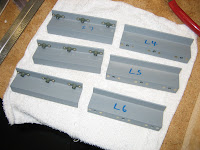 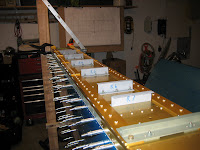 The Root Bracket is bolted from the other side so the nutplates are attached to the spar. Here I have countersunk the rivet holes that hold the nutplates on. These guys are going to be a bugger to rivet, Bekah will need to shoot from the top and I will need to buck from within the ribs.. I think this is something that could have been done when the Spar was being prepared.. Note sure why the directions have you do it now.. If I were to do it again I would look to get these nutplates on when there weren't any ribs in the way. (Note: if you decide to put the nutplates on earlier in the process, you will need to drill the "root" Z-bracket first.) Also, some builders hold off on riveting the last couple root main ribs to allow for easier access at this stage. 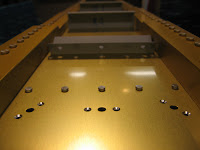