Finishing up the drilling of both left and right main skins. Getting closer, but no pictures since it looks like what I have posted before.

I am also starting to look at the Fuel Tank Z Brackets and am trying to figure these out. Lots of information here on the web and lots of different methods to work through this process. I think here I will look at the plans/manual and get familiar, but do it a bit differently as others have done.

Dan Checkoway was one of the first guys to put up a site/blog of an RV-7 construction. He did an amazing job and had some great tips and tricks. I followed his site through the late 90's as he was working on and finishing his plane and was amazed at what it took to put an RV together.

Dan, pulled his site due to personal reasons and I think the fame he got in the home built community became a bit intrusive, so I miss the opportunity to review it as I go. He had posted a way to work the Z brackets that others have followed with great success. Without his site I will kind of "wing" it from what I remember and from what others have posted and will try to go through it step by step for future builders.. Brad Oliver does a great job as well as other builder's sites I point to on my home page at showing this process.

There are 7 brackets per wing/tank 6 standard and one Root bracket. The "root" brackets are the same but treated a bit differently and we will get to that.. First you have to place a pilot hole in the Z brackets where they attach to the main spar. This hole is #12 and is centered lengthwise on a flange, but offset from center 1/16th inch toward the web on the 6 standard brackets. On the Root bracket, this hole is centered lengthwise too, but offset 1/16th inch away from the web.
The offset towards the web allows for better clearance from your rivet puller when attaching the 6 standard brackets to the tank with the blind rivets. On the Root flange, the offset away allows for better wrench access when mounting the bracket.

To drill the pilot holes I set up a "jig" on the drill press to try and get the holes as centered and perfectly offset as possible. 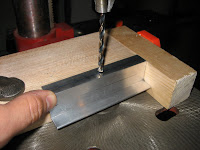 All the pilot holes are drilled, now I need to use some scrap bolts to anchor them to the spar as I match drill the rest of the holes.
Posted by Chad and Bekah at 9:26 AM