Last night I did some misc stuff as well as worked on the left wing leading edge.

First I was able to final rivet the right rear spar to the skeleton as it hung in the stand.. Now both Skeleton's are hung and final complete.

I also temporarily hung the right wing walk doubler as you can see below. This will eventually go underneath the top skin at the root of the wing. This pic shows how it looks without the skin. 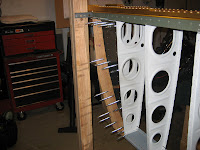 Also, the pics below make it look like I am further along than I am, but they are pretty cool. I was able to create a cradle as the directions indicate to hold the leading edge skins and cleco the ribs into place. After that I simply cleco'd the leading edge assembly to the top left spar.


I was concerned about clecoing the leading edge onto the ribs based on other builders sites/comments, but it went on really easy. In fact, you are supposed to remove the inside blue plastic first, but I placed the ribs in to see if the holes lined up and they did almost immediately so I threw in some clecos and kept going. I will probably pull it apart and remove the plastic before match drilling, but for now it looks cool..

In future posts you will see the Cradle/Jig I made to hold the leading edges in place while I cleco them. 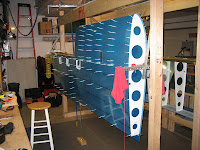 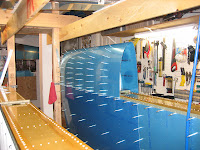 After the left leading edge was in place, I used reference lines I drew earlier to verify the tie down pilot hole and opened it up. Now the tie down can be inserted through the leading edge. 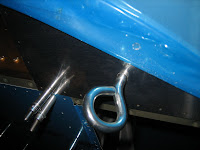 Next steps are smaller steps that will take some time. First, I will need to secure the trailing edges of the wings to the stand, still haven't done that yet. Then loosen the skins and make sure the wings are plumb before I match drill the entire main skin section on both top and bottom.

I will probably have the leading edge in place as I do this so that the wing can be as square and complete as possible while I am match drilling the holes. Also, the directions don't say this but I am going to keep both top and bottom main skins in place. I noticed that there is some sag in the spar if the bottom skins are in place. I want to drill the wing while it is in the most rigid straight position as possible.

And at this point I get to start working on the pitot mast for the left wing. It is easier to get started on this now so that I can have a chance to work on it with the skins either on or off the skeleton.
Posted by Chad and Bekah at 9:23 AM