I was able to start working on the left fuel tank but decided that I needed more clecos before starting the right, so will be ordering some from Van's shortly. Also, I am going to be going to Arizona for Halloween, so the bog entries and work will slow down a bit for the next week or so. I will probably get another session in before shutting down for the holiday but we will see. Bekah and I will probably rivet the nutplates to the spar for the root Z-Bracket. We tried today and had some big challenges, I need to borrow a non swivel flush rivet set to get the rivets in the corners, the swivel set just doesn't cut it here.

If you are building, consider putting these nutplates on when you prep the main spar. Sure wish I new then what I know now. I might go back and update a blog entry so that others who read this have the option of looking forward on this one. (Note: if you put the nutplates on you will need to drill the Root Z-bracket to the spar first)

So the left tank started with final deburring and fluting of the ribs, just like before. These ribs don't get primed because they will be inside the tank. I did end up cutting the tank stiffeners for both tanks and smoothed them all up. These guys go between the ribs on the bottom of the tank so that the skin doesn't sag due to weight of fuel., Here is a pic of them cut up. 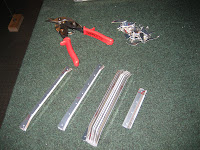 I read other web sites and determined that for the first assembly of the tank it was easier to start it outside of the leading edge jig and get a few clecos in place. I worked the upper and lower leading edge of the tank as everything began to take shape. 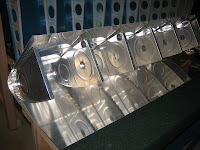