Today I fabricated and drilled the small angle that attaches the center top skin rib to F707..  This wasn't easy, but by lifting the skins and using the long #30 bit I was able to get in between the skin and the J Channel to drill the hole.  Difficult to see, but is shown in the first picture.  To drill through the F707 itself, I had to raise the rear skin and come in from the aft.  You can see in a lower picture that I had to go into both sides and basically remove almost all the clecos from the skins..  So while the skins were up I went ahead and drilled the bulkhead gussets to the longeron and riveted them.   I had used a clamp to hold them after aligning them when the top skins were on.  Also,  now that the skins were almost all the way off.  I thought why not bite the bullet and take them off for all the prep work that is necessary..  So I was able to debur, dimple and soon will prime the skins before they go back on.  Getting the boring stuff out of the way now so I can move faster later.  ;-) 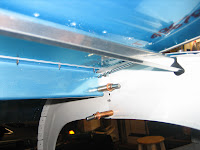 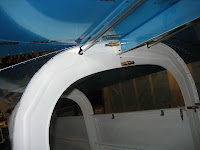 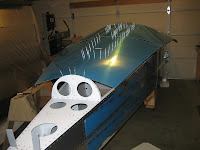 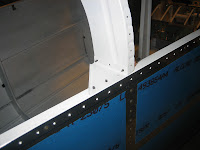