I got through tons of work on the plane this weekend and really should have posted a few times..  I was much more excited about continuing to move forward than to put together some posts on this blog, so I will put it all down here and hopefully not miss anything..   As you can tell from the pictures I was able to finish the baggage floors and 706 corrugated bulkhead.  This really brought the rear cabin in to shape and it looks great..
The biggest issue I had to deal with was that my rear baggage side panels weren't drilled correctly.  The holes along the top were off by about 1/4 hole..  So to keep moving forward I just enlarged the holes and used larger rivets that I already had.  It doesn't look bad at all and since they were cherry-max rivets, it is definitely structurally sound, even stronger than the plans ask for. 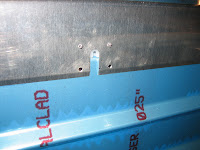 There was so much work I don't even know where to start..  I trimmed the top of the rear baggage bulkhead so that it would fit, then I was able to measure out a 1 inch gap to the top skin..  This is different than what the plans say to do, but it makes it turn out very nice with a smooth contour that follows the skin nicely.  Also on the bulkhead I created the seat belt wear blocks that allow the cable to slip through the bulkhead.  These required lots of measuring and a bit of metal work.  I need to finish the metal prep before I can rivet these wear blocks for good.
I also was able to initially install the static system in the rear fuse..  No pics of this for now since the bulkhead is in place, but I will have some future pictures where it is visible.
Finally, the rear baggage seats are final riveted.  It really  makes the plane look bigger and "finished" with these in place..  I also place the peddles in temporarily to see how cool they looked..   ;-)  I can't wait to get to the seats and then for the first time sit in the plane with Bekah..  That should be in a couple weeks.. 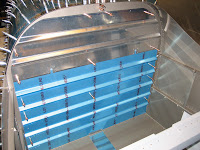 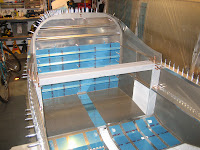 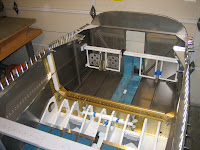