Conduit, under the seats.. Well that was tougher than I thought..

Not that it was too tough, but it just took a bit longer than I expected.  ( However, it didn't interfere with Bekah and I watching the Superbowl..    :-)   )

In general, I intend on following the plans and rivet the seat bottoms and baggage floors into place.  Some people choose to screw these down, but my thoughts are more along the lines of simplicity and strength..  I think riveting is a better more secure solution.  However, it makes it difficult to access under the floors for wiring etc..  So I decided to run some conduit..  Lots of people do this in lots of different ways, but I chose to pop rivet some conduit standoffs between F705 and 706.  This will allow for running wire under the seats..  Looking forward to the wiring part now that this is done..  Should be much easier with the conduit in place. 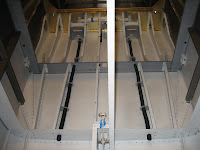 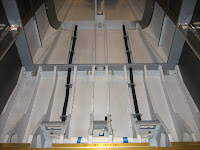 Also....   Just a quick side note to the astute viewer..  In the pictures above, and who knows how many other historical pictures, you might have noticed something I forgot to do, or sort of a mistake..  If you notice closely on the baggage compartment vertical bulkhead I forgot to open up (drill out) the rudder cable pass through..  Well, I have since now done this and corrected the issue.  Access wasn't easy, but it was overall a simple fix.  I blame this on the plans, because even though they do mention it; in the picture they don't show the hole opened which is an inconsistency from other areas.  No problem though, issue fixed and moving on.