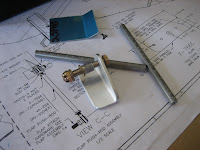 I am working a bit out of order and should really get those seats riveted in before going too much further.  I am hesitating because I think I might go with a two tone interior color.  I am thinking about putting in a lighter color in the seat area including F705 and F704 supports that go up the sides of the fuse.   Once I figure this out I will take care of the seats..  In the meantime I focused on the flap mechanism that needs to be done anyway.  Its kind of exciting because I get to work with some parts other than just sheet metal.. 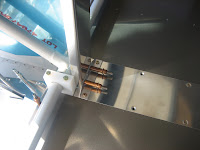 First off the plans have you fabricate a bunch of parts then test fit the white flap tube (weldment).  I don't have pics of everything, but are showing the main pieces involved.  The electric flap motor sits in a channel that sits right between the two seats and moves the flap extension up and down which moves the end extensions that connect to push rods through the bottom of the fuse and attach to the flaps. 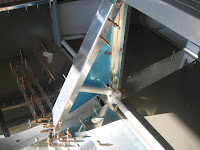 A few points to note is that you should make sure to check the bag that has the flap motor in it first because it contains parts that are further along than you might think.   I missed this step and fabricated many of the parts from raw scrap metals.  They all turned out great but would have been easier to use some of the precut ones.

Also,  it takes a lot of finesse to get things to fit great in this section.  Looking forward through the entire flap mechanism is important because the plans have you drill and install items early on that could impact things later in the build process.  I think I got lucky in a few spots and it turned out great..  For example the middle UMHC block.  I chose to center the holes on the baggage ribs...  It let the block hang over a bit, but turns out it fits very smoothly against the support where I have noticed other planes have gaps between the two.

So all in all it went together well, even though it will need to be taken apart to get the seats down for good.

There was one big boo-boo that I made..   I grabbed the #12 bit vs the #19 bit when I drilled the top of the rear vertical support.   You can see the two alternate color cleco's below..  The gold one is in the larger hole that I drilled by error..  To fix this and keep symmetry I will probably drill both them to the larger hole and use a AN3 bolt and an associated nutplate here.  No harm no foul, will just be stronger.  (and a bit heavier.) 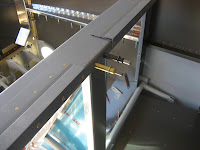