I am starting to plan my move to the hangar now..  It won’t be long, but at the same time I am trying to get every little thing done I can before making the move.  Working from the cold hangar doesn't sound too appealing in December…   So I was able to fit some seals up on the lower inlets of the lower cow.  Using a .040 backing plate and some #6 screws, I cut the baffle material so that it would slide into place and block the air from escaping forward around the lower baffle ramps.   It turned out pretty good on both sides and doesn't make it any more difficult to mount the cowl. 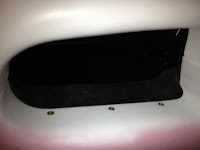 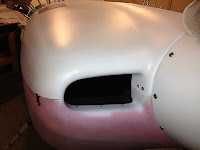 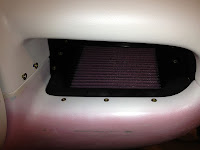 After that I did some research and decided it was time to start building out the Canopy Fairing.   Here I am venturing again into unknown territory.  So I looked at a few other sites, read the directions that came with the kit and am just jumping in.   The leading edge of my canopy fit across the lower skin very well, so I don’t need to use any rivets or pins to “lock it down”.   Also, some people don’t do this without the canopy on the airplane, I am using a level surface, so am confident I won’t have any warp built into the canopy, but we’ll see.


I started by using some pipe tape (20mls thick) to draw the line where the canopy fairing will come up to..  Then with 40 grit sand paper, I scuffed the plexi and aluminum as much as possible, even under the lip where the fillet will go.  Using standard west system epoxy I mixed in micro balloons to get it super thick and some black pigment since this will be visible from inside the cabin, I got it nice and black.   I used a Popsicle stick and some finesse made the filet to fill the gap under the lip.   This will be sanded down quite a bit before I got to the next steps of applying the fiberglass layups, but it shouldn't be difficult to stand since it has filler in it. 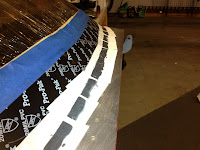 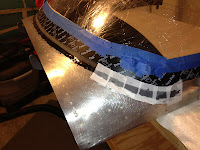 Then I wrapped the thing with peel ply sheets which is supposed to set the epoxy up to be easily sanded, or ready for the next coat of epoxy without sanding.  This was mainly a test, I will be using the peel ply much more when it comes to the actual fiberglass lay ups.
Posted by Chad and Bekah at 9:40 AM