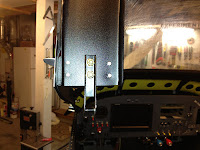 I spent the last couple nights working on final fitting the canopy and the rear window.  The canopy lugs went in without much issue, but the passenger side did hit the longeron cover that it has to transition through to get captured by the retaining mechanism.  To correct, had to grind of a small amount of the rear flange on the lug.  No problem, looks good, in fact I did the same on the right just so it looks the same.   Other than that I have them positioned pretty much perfectly.

Then it was onto getting the final fit of the rear window to Canopy.  During construction I left both about 1/32 too long so that I could really nail the final fit after I riveted the front skin, which effects canopy forward aft location.  Now that I am reasonably sure the canopy won’t move much, or at least that I can control its movement (with my forward stop mod I built in about a year ago) it was time to final fit this thing.   Lots of sanding and the rear window was in and out about 6 times, but I finally zeroed in on it and got the canopy to close.   I used a long straight sanding bar and am really surprised how accurate I got the fit between the canopy  and window.   Looking at it, the seam is extremely straight and uniform.  I am a little shy of 1/16 inch gap so I might open it up a small bit more to allow for expansion etc..    Right now,  I don’t even think water would drip through due to surface tension.


At this point with the lugs done and canopy/rear window fit,  the plane is ready to head to the airport ! 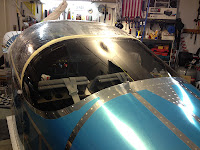 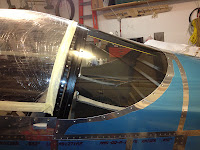