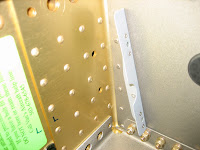 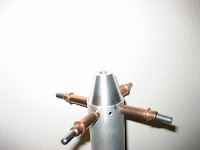 Continuing on, I am now working on the front covers in the forward fuselage. I can't go too far on these since I don't have my fuel pump yet.  Since I am getting the EFII pump, I will need to get creative with the center cover.   I will probably start it before the pump gets here, at least where it connects to the firewall, but for tonight I just finished the forward F705 cover-plate supports.   These are on the outside and support the cover plates on the -7 models where they cover the fuel lines and electrical.  You can see I used pulled rivets into the gear web as directed, however, I used shorter ones that specified.  Since the gear web butts right up against the outside skin, the LP4-3's were too long.  I am not showing how I drilled the holes in the gear web, since I did these long ago when the fuse was upside down.  For the nutplates, I used pulled rivets, since squeezing here would have been impossible due to hole position per plans..  Anyway, finished there and also cut and drilled the elevator push-rods.  These guys were harder than expected since the fit of the aluminum cone was not perfect with the tube..  Lots of sanding had to occur. 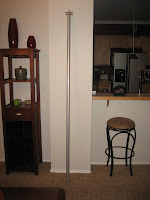