Today was a big day in the shop, but not as much to show for it as I had hoped. 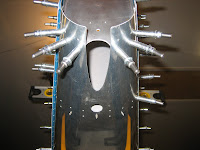 First I started on the tail cone skin, opening up the hole in the bottom for socket access later when installing the tail wheel spring.  I also used the template from the plans and traced and cut out the slot where the tail spring exits the tail cone.  This took quite a bit of time filing and sanding, test fitting, to get it the way I wanted it.  Turned out pretty good.
Then onto the tail spring assembly and fitting it between bulkheads 710 and 711.  You start by using the bottom holes in 710 that were left open from when the bars were riveted on as a guide and center the end of the tail spring assembly on the bottom of the bulkhead.  I drilled it with the #30 first, then opened it up to 1/4 for the AN4 bolts.  Turned out well, until I tried to put on 711.  Turns out that my tail spring assembly was welded crooked.
VANS AIRCRAFT NEEDS TO HIRE BETTER WELDERS..
The directions say to shim any gaps, but it is pretty hard to shim something as twisted as this was.   I did my best and think it will turn out just fine, but it so easily could have been welded correct to begin with..  Oh well.  Once the shim was fitted, I drilled for the retaining rivets that hold the rear of the spring until the vert stabilizer is mounted permanently securing the rear of the spring. 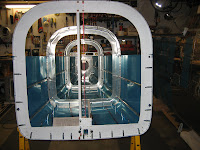 Next I started the J-Channels and ended up cutting each of them 2 or 3 times to get the fit right.  This was quite challenging for me and very time consuming.  Actually it took me all day because you have to put the entire aft body together then take it apart, then put it together again a few times before everything is over.  cutting the angles on the stiffeners was challenging to say the least, especially since you are working with 8 foot lengths of aluminum..   ( I am not looking forward to the 15 foot longerons.  )
Once all said and done, The aft body came together well, and I was able to verify it was plumb by using the plumb bobs hung from the tooling holes.. 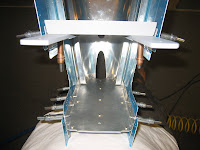 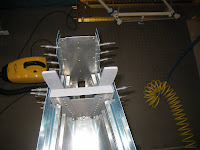