I haven’t cut the panel yet, but I decided I wanted to work on the switches on the left side since they seemed pretty straight forward.  These switches include the Start Button, Master/Alt switch, Electronic ignition, Magneto, and avionics switch which really just takes advantage of the VP-X.


I immediately found these switches weren't as straight forward as I hoped..   Here is a quick explanation...  The Magneto, which is a shielded wire where the shield is grounded to the mag case, the switch end (at the panel) needs a pick line with a resistor coming off the power side which sends pulses to the Dynon to be used for the Tach reading.  The lightspeed unit itself also provides RPM info to the Dynon which will be hooked up later. 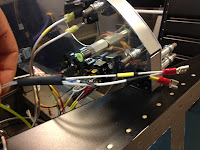 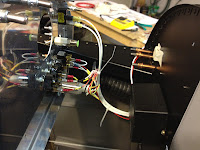 The Master switch uses a loop to make the DPDT (on, on, on) switch act like two switches (one for batt and one for alt field).  I have it so that battery comes on first, then the alt field.  So the alt field can't be turned on without the battery on.

The Start button has three wires due to my special Honda S-2000 start button discussed earlier in this thread...  Its hooked up but I haven't tested it yet.  Need to make sure all is clear with the VP-X before I go that far..

All in all I am making progress though..  I have everything done except for the Electronic ignition (Lightspeed) switch.    Hopefully I will get to that this weekend.   It’s a switch that is inline between the lightspeed box and the breaker, basically the shield bypasses the switch and the power wire is what becomes switched.  Then the 18 gauge shielded wire goes to the 5 amp breaker on the other side of the panel.  (will be coming soon)