After marking my line and checking it twice, I decided it was time for the big cut.   You are supposed to use a table or saw horses, mount blocks to hold the canopy from flexing and splitting while making the big cut..  I tried a non-conventional approach.   I had it in the grass a few days ago and realized that the grass grabs the edges really well.  Adding some scuba weights on each side sealed the deal, and it was so much easier than per plans.  The riskiest part was cutting up each side about 3 inches while propping it up so that I didn’t have to go all the way to the dirt with my cutoff wheel.   I also barely had 70 degrees here yesterday, but was determined to make it work.  I used duck tape to help hold things together as I went along. 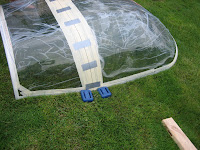 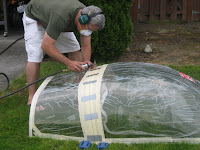 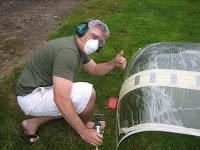 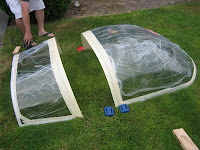 Happy to say that it turned out Great !   I now have two halves of canopy and it is easier to move around than ever.  Time for some final alignment and cuts before drilling.. 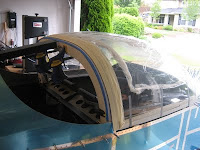