Side Ribs and Seat Belts 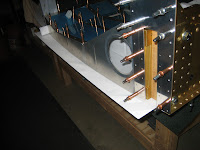 During the latter part of the week, I was able to finish up the side seat ribs on the center section.  They were fairly straight forward.  Lots of fluting to get the curve just right, but also, I think mine seem to have been bent just a bit different than others.  The rear part is absolutely flush with F-705..  The instructions say to let the outside of the rib stick out just a bit from the seat skins by about .032.  This worked well, but at the very aft part of the seat pan (next to F705), there was no way I could get that much out of it.  But in fact the seat pans stick out past the edge of F705 anyway..  Which really tells me I need to get the seat pans on the scotchbrite wheel a bit longer and take off some of that aft edge.   I am fairly sure things will work out OK here, but looking at other sites, it appears that the side ribs on some other builders just stuck out a bit more from F705..  Which really doesn't make sense to me anyway, since the skin has to be smooth across the two of them.   Does it make sense to you either?   I didn't think so..  ;-)
Also, I know it is way too early, but I ordered my "Crow" 5 point harnesses and they just came in.  Was going to go with Hooker Harnesses, but the cost of these was just way too attractive.  Turns out the harnesses themselves look awesome and I am really happy with them.  Rebekah and Libby approve as well and says they look very secure, which is important in her book.  Now to just figure out the bushings that I will need to get and how to mount the crotsh strap in the plates that I worked on a few weeks ago. 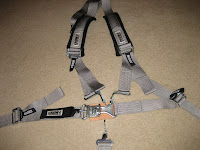 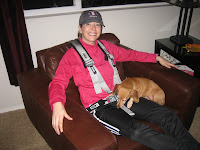