Wing Tips and the last Antenna

The airplane has 8 antennas and the Wing Tip Mounted Nav antenna is the last one I have to deal with.   This is a very unique antenna designed by some rocket scientist, but if you set it up right its supposed to work pretty well.  The benefit is that it is inside the wingtip and functions as both a VOR and LOC antenna.  The external antennas that provide this function are big and ugly so this antenna fits the RV quite nicely.   Plus gives me full IFR ILS Approach capabilities.

(I have been asked, so for those who are interested, my antenna's include: 2 Comms, 1 Nav, 2 GPS, Transponder, ADS-B, and an ELT.)

I am putting the antenna in the right wingtip so my focus was on this wingtip all night.   I riveted the antenna into the nutplates that secure the wingtip to ensure a ground contact with the airframe, also I added the heat protective cover for the HID landing light. 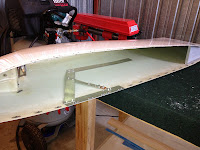 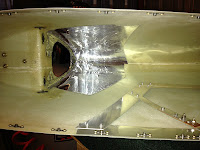 After initial set up I installed the landing light and positioned it as best I knew how at this time.  I will have to do some testing with the tips on the wing to make sure it lines up right.  Also, ran the wires own the leading edge of the antenna as indicated in the instructions..  I used the heat protective tape to secure the Nav/Strobe wires which will secure them as well as protect them from the heat of the landing lamp.  With all wires connected and secured I mounted the wingtip and tested it out.  Everything for this wing tip functioned as planned.  I will secure the antenna with tape initially for test flying, but once it is proven I will run some fiberglass over the tail and some of the antenna mid sections to keep it secure to the bottom of the wing tip. 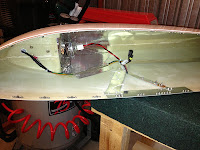 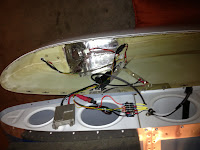 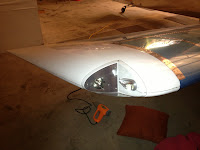