Mated the Wings ! - Kinda like building a ship in a bottle... 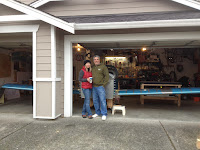 I spent the last couple days rearranging the garage so that I could get the wings mounted for the first time.  In building, you need to mate the wings a couple times about midway in the build to set the sweep and incidence, drill the fairings, drill the flap holes, drill the fuel tank bracket, and finish the plumbing for the fuel line and vent..    So all in all I will have the wings on for a couple weeks.  This is the first time in the build that Bekah will need to park her car outside for a while and I am bummed that it is December, but the time of year can’t be planned. 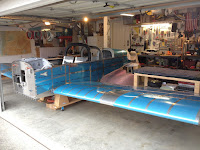 Anyway, I organized the garage and measured everything out, looks like it will fit..   I lubed up the spar and drift pins with Boe Lube, filed an ever so slight bevel in the spar per the directions.  Got the wings prepped by removing the flaps and anchoring the ailerons..  Then had a fellow builder and Bekah help slowly slide the wings  into the fuse.  It went really well and faster than I thought.   The whole process after the prep was done only took about 30 mins I assume. 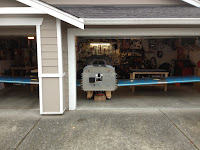 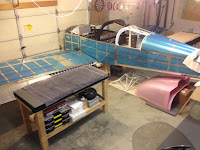 Looks awesome !  I can’t  believe how exciting this moment was to see the plane coming together in my garage..  Kind of like a ship in a bottle, but very cool just the same.  Once the wings were mounted I put some plumb bobs over the leading edge at the root and tip and used them to get an idea of the “sweep” of the wings..  Its only about 1/8 inch forward sweep, and will need to trim a small amount off the rear spar attach point to correct this.  All builders have to do this, but to see how much needed to be trimmed, I had to mount the wings first.   Its the forward bar on the fuselage spar where it interferes with the wing rib flange.   Quite common..  Tomorrow they will come off and I will trim it all up then get them back on to set the incidence..   Looking good ! !
Posted by Chad and Bekah at 8:34 AM