While the engine mount was on, I measured out the bit of firewall flange that needed to be cut back to allow for the gear legs.   You can see in this pics what I mean by this.  Basically I used a die grinder with cut off wheels and various and other bits to trim back the flange.  Turned out OK, but in the process I sure breathed in a lot of metal..  Probably should have been wearing a mask for this one.. 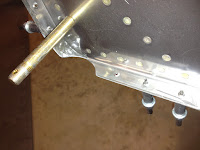 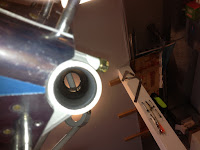 After that I started working back inside the fuse again, on the flap sensor.  This is a cool unit as it will tell my EFIS where the flaps are and I will get a readout on the panel if they are up/down, or in the middle.  It also will allow my flaps to be set so that one flip of the switch will either raise them all the way then stop, or will raise them to a preset point.   Without this sensor, I would have to hold the switch and count or look at the flaps to know exactly where they are.  I didn't take any shortcuts on installing this sensor.  I created a fully serviceable mount, and took the time to make sure it was in line and was a straight shot at the sensor.  Hopefully a long useful live out of this one.  Those who are familiar might recognize some of the parts I  used on this.  Lets say they aren't TSO'd but are fully functional.  ;-) 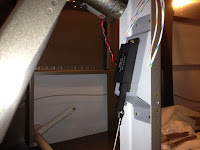 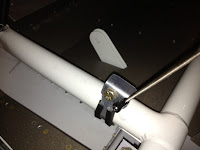 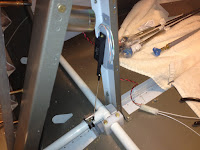