This weekend I put about 6 hours into the RV.  Got lots done and am now almost ready to remove the wings and get them up to the airport.

I started with a test fit of the root fairings, they are pre punched and can cleco into the back part of the wing, but where they wrap over the tank there are no pre-drilled holes.  I measured out a line 3/8 inch from the edge of the tank and after aligning the holes from the fairing I started drilling into the edge of the tank skin.  Once I reached the leading edge of the wing, I wrapped the fairing around and anchored the underneath to the aft most point on the tank and finished drilling.  Took some time, but it came out straight and looks good. 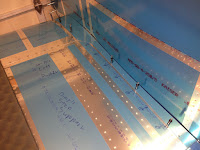 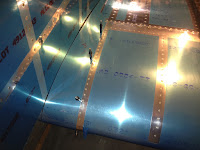 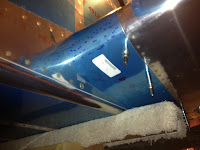 After that I started working on the tank attach points and vent tube.  for the attach point, i bent it per the plans until it mated well with the tank flange.  To drill the hole I just used my 1/4 inch angle drill here and leveraged the steel attach point to help keep the bit centered as I let her rip.   I did find that it was easier with the fuse attach point bolted down..  Made it solid and drilled straight and clean.  I used a sharpie and marked 1/4 seam away from the fuseloge.  Then removed them, cut them along the seam and cleaned them up.   Now ready to dimple and prime.

The vent tube was pretty easy, just some short runs here to connect the vent out from the tank into the fuse vent pick up.  Easy.. 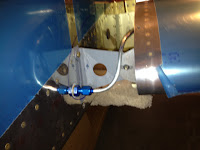 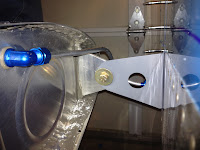