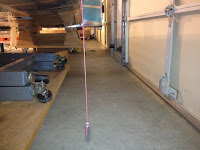 After you set the incidence and sweep on the wings, you lock it in by drilling a bolt hole in the rear spar of each wing.  To set the wings I used 4 plumb bobs and string along the leading edge to ensure tip to tip they were straight.  With only one mount and removal of the wings I was able to trim the rear spar up enough to get the sweep what seemed perfect to me.  I confirmed by measuring and getting the exact same measurement on each side from a common point on the tail.   I don't think I can do anything more to ensure the wings are straight.


Then I used a bubble level and measured the incidence on each wing  from tip to tail with a 3 inch riser off the rear spar.  I don't have any pics, but the fuse had already been leveled, so with the spacer on the rear spar and the level on the front spar, I moved the aft part of the wing up and down until the wing was level.  So basically the rear of the wing is 3 inches lower than the main spar, when the fuselage is level.  Its most important that both wings are even and level, so I measured this several times.  With both wings leveled out I was finally set to drill the rear spar retaining holes.

These holes are arguably the most important holes to drill correctly on the entire build.  Edge distance is critical as well as a straight clean hole.   I used an undersized reamer and stepped up to it with various drill sizes, and took about 2 hours to get the hole thing done.   I am pretty darn confident that I nailed it.. At least I am happy with the outcome and will trust this to hold on the aft portion of my wings.  ;-)

Also, before I did this I installed the flaps to ensure they were even on the fuse, they looked good at this incidence, also I noticed that with the hardware bolts in the main spar attach holes, there was about 1/4 inch slop out at the wingtip.  Something no builders have talked about.   However, the slop was even and consistent on both sides and only in the up/down direction, not for/aft or longitudinally..   I am good here, but just something for other builders to note. 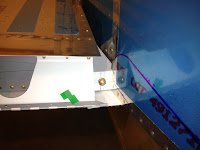 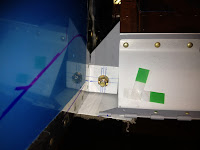