Taking a tip from a fellow builder’s site I ordered some fuel line from Bonaco to allow for a short final run of my fuel line from the Fuel Injection servo to the Spider on the top of the engine.  I had to remove and cut a hole in the inner cylinder baffle and install a grommet, to go around the fire sleeved fuel line, but everything went together really well.  Inline I included the "red cube" fuel flow transducer, which measures my fuel burn.  I feel pretty good about this set up.  I had removed the baffles to allow for easier access, so am also taking the time to prep them and final paint them before re-installing them.  Bekah snapped a photo of me out on the deck doing RV work.  Living in Seattle is great, as I was out there two RVs flew overhead.   With the motivation above, I started scrubbing the metal really fast after that.  ;-) 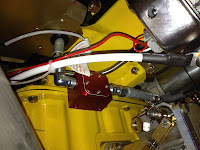 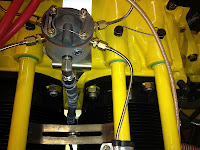 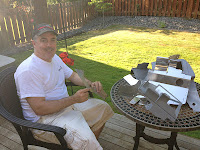