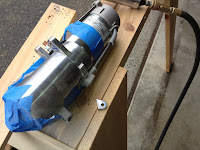 Continuing with the baffles I decided it was time to start looking at the horizontal induction.   Most builders do this much later in the build, but I figure it is a tough part which surprises them late in the game, so I wanted to get through this early while I am still waiting on my avionics. 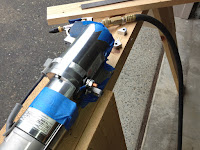 The Horizontal induction is cool, because it means my lower cowl is smooth, unlike many RVs that have a snout there to induct air for the engine.   In my case, the air is taken in through the same two forward holes in the cowling that allow for cooling.   But in order to achieve this you  need to install a snorkel in the inlet ramp that pulls air through a filter down to the horizontal induction.   So to get this snorkel to fit, there were lugs I had to cut of the starter, also the alternator bracket interfered so I had to cut a hole through the snorkel, which will be glassed in later.   The mixture control comes close to the snorkel when it is in  full lean position which is only on shut down, so I will keep an eye on this and determine if I need to cut into the snorkel for better clearance here as well.

After removing all obstructions I was able to center the snorkel on the air intake and drill the holes to fix it where it needs to be.  By the end I had cleaned up the circular mount cutting it to the same square as the air intake.  I also sanded the surface where the holes are flat so that the bolts have something to grab onto. 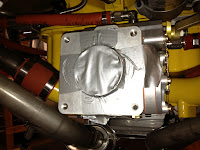 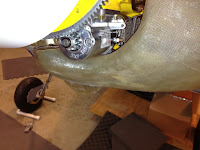 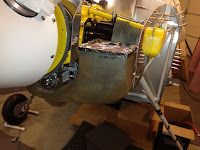 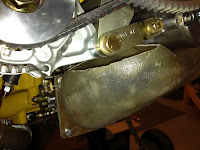 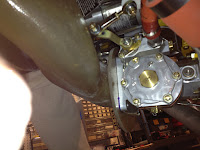