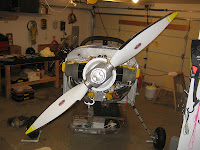 This weekend was jammed full of Airplane work.   I mounted the propeller on Friday, just to see how to do it and sure enough once you start you can't finish.  It took about 2 hours to screw the thing on because the bolts bind on each other if you turn any single one more than about 3/4 turn without catching the others up to it.  So basically each bolt you turn slightly, then turn all the others slowly and evenly pulling the prop to the flywheel case.   Getting the rear of the spinner on behind the prop is a different story, but I got her done.   I didn't torque the prop or safety tie it, but it seems to be on for good now.  It may need to come off, but hopefully not. 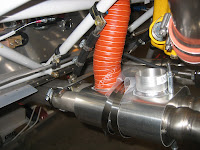 Then I started working on the Exhaust, which went on straight forward for the most part.  I had some troubles with the support tubes that slip inside the rubber sleeve and "hang" the exhaust from the engine mount.   These are shipped pretty long and need to be trimmed, but I was only able to figure that out after they were mounted..  I also temporarily fit the heater box which in an airplane is simply a box that feeds air over the exhaust to get it hot, then through the orange tube you see there goes into the cabin through the heat selector.

I also worked on both the Mixture control and Throttle control.  The throttle control although more work was straight forward and I am really happy with out it turned out.   You can see I had to fabricate a completely different mount than what came with the firewall forward kit.  The Cold Air Sump I have is quite different than the one vans expects to have on the IO-360..   You can see the one I made is similar, but complete different dimensions than the one supplied by Vans.   Primed, painted and installed.  The throttle functions quite smoothly. 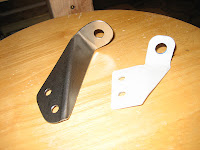 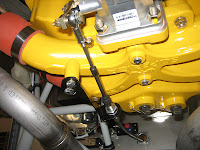 The Mixture control, I was able to use Vans Mechanism for the most part.  There is a bit of a difference due to the cold air sump on this one too, and in fact I need to grind down an engine plug and fill the hole behind the mixture bracket "flush", but grinding the plug is taking longer than I thought, so I will get a picture of it once complete.  The challenge with the mixture is that the linkages seem to be just a bit long in all cases.   I pulled everything in as tight as I could, and actually drilled a closer in hole in the mixture arm.  Some builders buy a new arm that has a smaller radius, I am hoping I can get away with modifying the arm like I did.  In the end I might buy a new arm just the same, but this one seems to be working good.  There is not much throw now and I go from Full rich to Cut off in about 1.75 inches of the cable pull.   Will need to see if that is acceptable.   Other than the couple concerns, the mixture is coming along nicely. 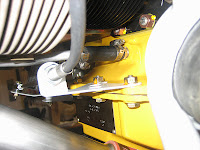 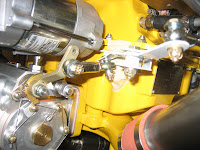