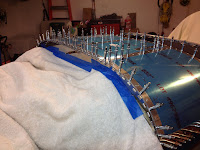 This weekend I started in earnest on the pink cowl.  First on the list is to start drilling the hinges to the forward top skin.  I used cleco clamps here and was able to get them drilled with the appropriate shims in place.  Then I added the other hinge (cowl side) using the full size aluminum hinge pin just to make sure I could get the pin through the hinge.  This will help make sure the hinges are inline, then when the plane is in finished I will replace this aluminum pin with a smaller (stronger) stainless steel pin. 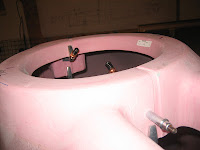 After drilling the hinges, I pulled them off to start initial fitting of the pink cowl.   My initial take is that the cowl is going to be quite a challenge.  Lots of fitting and removing, and sanding, fitting removing and standing etc..   I trimmed the forward center flanges so that the spinner circle on the cowl was flush and as circular as possible. 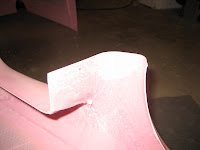 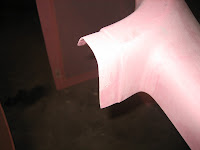 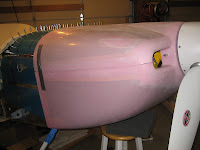 Then before drilling anything the top half of the cowl, I test fit the bottom.  I trimmed the landing gear egress through the cowl, which took many more iterations that I had hoped.   I taped up the landing gear pretty good to protect from the abrasive cowl.  Getting it all together and roughly fit I am able to start seeing how this will go together.   The edges didn't overlap much if any at all.  I was worried a bit because some builders have had trouble with the cowl edges not being long enough.   By letting the cowl fall where it wanted and using some duck tape to pull up the edges, they eventually fit quite well.

After Fitting and sanding and fitting and sanding, I drew up the rivet lines on the top cowl at 1 inch apart and drilled the cowl to the hinge.  The cowl kind of has a mind of its own and wants to lie where it lies.   I had the bottom cowl taped up when I drilled the holes so that hopefully it was as square as possible. Seems to have turned out well so far.  The prop spinner is about exactly 1/4 from the cowl as indicated in the plans. 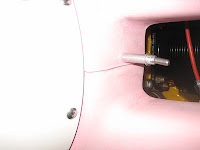 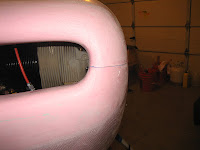 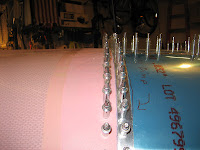 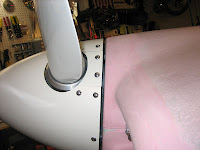