I drilled a second hole in the mixture control arm which seems to be at the right distance from center to avoid interference with the starter and as well give enough throw in the mixture control.   All in all I think this will work out great.  I also used Permatex #2 and reinserted the ground down plug in the engine behind the mixture mechanism, as seen in the second photo.  Then I painted the plug using the touch up paint from Aerosport almost making the plug dissapear as seen behind the mechanism in the first photo.  ( I know very confusing) 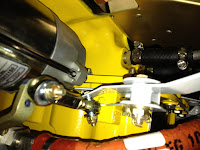 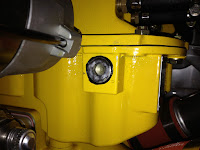 After that I started working with Fuel lines and the Fuel Pump overflow.  The fuel lines came with the firewall forward kit and I will be able to use most of them.  I will have to replace some though due to custom items I will be installing, like a fuel flow meter (red cube) etc..

The Fuel Pump overflow is simply a tube from the fuel pump, that gets routed out away from the exhaust and through the bottom fuselage skin just aft of the cowling.  Turned out pretty good with some “rescue” tape under the high temp zip tie to protect the engine mount. 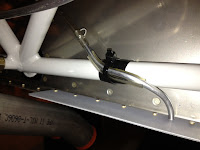 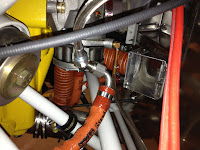 After that I decided to get a sneak peak at the top cowl.  Bekah grabbed a couple shots. 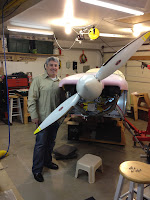