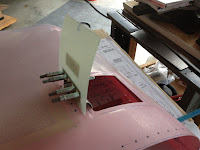 Some ups and downs in my recent work on the airplane.   I am excited about how the oil door has come together, but also made a mistake (recoverable) on the cowling..  So we’ll talk about the oil door first.  I got a “hidden” hinge on a previous order and was excited to finally be able to use it.   First I gut the square hole in the cowling just over ½ inch inside the edges of the indent for the oil door.  I rounded the edges and it looks pretty good.  Then I started drilling the two pieces of the hidden hinge.  I put a piece of .040 under the piece of hinge that attaches to the cowling to help offset the door so that it was flush when closed.  Also, the way I placed the hinge, it heat the upper section of my cowl cut out when I first functioned it.  Took off about 1/16 inch additional and am really happy how it finally turned out.   I have some “Hartwell” trigger lock flush latches on order that will be installed this week, to finish the door, apart from the riveting.   Also, I would not be nervous about making the door smaller than the “frame” on the cowling.  I have a good 1/8 inch outside of the door to the frame, which is good as it ensures a flush fit.  The additional space will be filled in later as I finish the cowling, to frame the door in nice and tight. 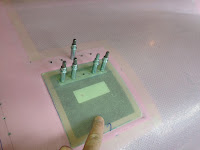 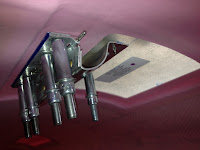 Onto the cowling.   I am happy the way it turned out, but after the fact realized I used the wrong hinges to secure the upper and lower cowl.   I used the hinge that was intended for the gear leg fairings.  It’s a very slightly smaller hinge and I assumed it looked good for the job.  Also, the hinge I was supposed to use I had previously used somewhere along the line,  probably for the seat backs, so I will need to order more.   The fix will be easy, just bummed due to the time involved.   But that said, the cowling now completely supports itself and I am really happy with the tightness and flush-ness of the install.   Hopefully when I replace the forward hinges I will be able to keep it the same. 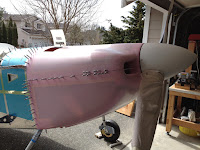 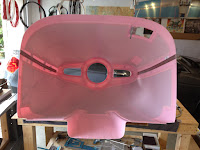 Also, this weekend we had good weather for the first time since I could remember, so I pulled the plane out and let her see the sun for a while.. 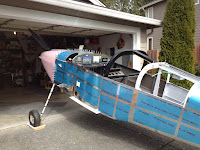