Lots of fun stuff in this box to play with, unwrapping each butcher paper package is almost like Christmas Morning. !!  The first package of butcher paper I unwrapped unveiled the tail wheel..   I have never owned a tail wheel before..  This is just awesome  ! !
The inventory went really fast this time.  My mom was in town so was able to help as I tore into the box.  We discovered via the inventory that Van's actually sent me a wrong part..   I go two F-719-R's..  I was supposed to get One F-719-R and One F-719-L..  Will call them tomorrow to get it straightened out.
The one thing I noticed about the fuselage is the number of smaller parts.  You would think there would be lots of bigger parts, but all in all, there are tons of little pieces and bags with fasteners that eventually will go together to make an airplane..  I have no idea where I am going to put all this stuff.
The second picture here pretty much shows everything that came in the Fuse Kit..  Except for the tail wheel and tail wheel assembly which are sitting on the coffee table in the family room..  ;-)  (also some longer parts already in the rafters and a few skins up against the wall) 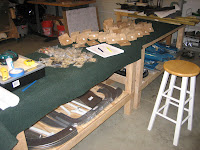 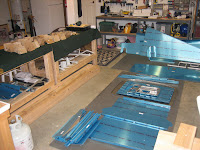