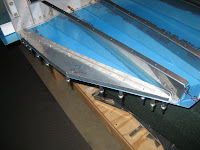 I got tons done yesterday and figured maybe today I can finish the pre-work associated with the Center Section.   I started with the baggage side ribs..  There are a few straps you need to make so that they can attach to the 705 and 705 bulkheads.   The directions aren't clear, but I have seen other builders work on these and decided to make the front ones a bit wider than the plans indicated.  This resolves the problem from the plans that have you build the strap where it incorrectly cuts a rivet hole right down the middle. 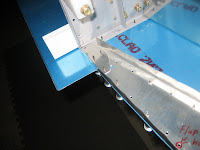 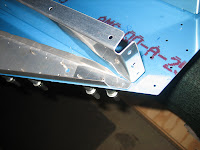 The rear strap, I build exactly per plans and it worked out fairly well.  Edge distances might be a bit of a problem, but its per plans and I am going to go with it.
I also was able to put on the 704 side doublers and drill them out.  Worked out well and I assume Vans has you do this now so that you can make sure your spacers are correct before you get two far down the road.   Mine fit fairly perfectly.  Also, With these doublers drilled, I can go forward and countersink them so they are prepared for next steps. 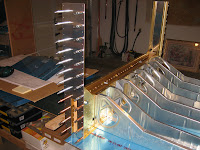 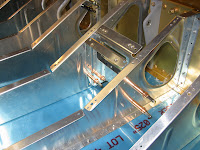 After this I took a big chance.  I don't have my seatbelts yet, but am pretty sure I am going to go with "hooker harnesses" which require a certain distance between the two plates that hold the crotch strap.   I emailed hooker and they said that 3/8 inch would work fine..  I really wanted to have the strap in hand before I did this, but I had the time to build so I went for it.   I first measured the distances which of course all came out different than Vans instructions since they only have you set a 1/8 inch gap.  The 3/8 inch gap is much wider so it adds a bit of difficulty.  I was able to get through it by lining up and drilling the front plate, then using several CDs as spacers which worked perfectly by the way, and was able to get the back plate on with exactly 3/8 inch gap.  I Worked through both pilot and passenger crotch straps and am now ready to pull this whole thing apart for metal prep and priming before I do the final assembly.
Then I had to put the seats in just to check it all out.  Looked great ! 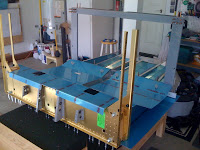 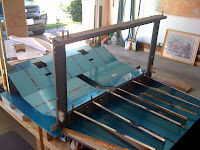