Today I continued working on attaching the spar nutplates and countersinking for the screws that hold on the tanks. There was a lot of metal that needed to come out so that the #8 screws will lay flat. I tested the countersink gauge depth with a sample aluminum sheet dimpled the same as the tank will be. Also, per other blogs and the RVator journal, the correct depth is .370 inch.. Using a digital caliper, I got each hole pretty exact. A lot of people make up special jigs to help ensure the countersink is centered and the hole concentric. I decided to try it the way Vans instructs in the manual and it turned out great. I used a number 30 countersink and with the pre-riveted nut plates, the countersink remained centered and concentric. All shavings were easily vacuumed out. Eventually I will prime the entire strip where the counter syncing took place but as you can probably see in the pictures that I did take a cotton swab dipped in primer and primed under the countersunk rivets holding the nutplates on. 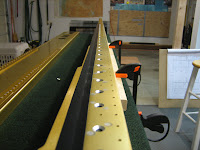 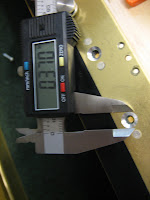 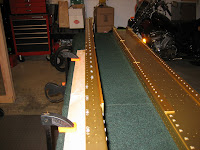 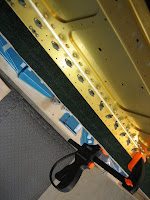