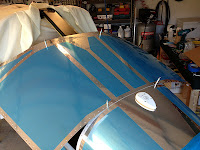 Since I have everything I can think of done in the tail cone and the area to the rear of the baggage compartment I figure it is finally time to get that rear top skin on.   I started down the middle spine and then worked from the rear out to each J Channel.  Here is where I got pretty frustrated.  I remember in the instructions probably about 1.5 years ago, it said, don’ rivet the rear of the center rib to the aft bulkhead due to rivet interference.  Well, sure enough somewhere along the line I forgot that piece of info and riveted it.  Now I couldn't buck one of the rivets that sat straight above this.  So instead of tearing it apart, I decided a single pop rivet would give it character until it was painted.  Then once painted you would never know since I filled the hole with some proseal..  Other than people giving me a hard time between now and when it is painted it won't be a factor..  Its just one of those things where this far into the project you have to consider just pushing forward to get done, vs. continued rejigging for perfection..   I chose to move forward.  ;-)