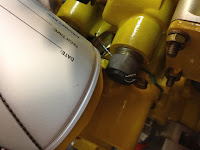 This weekend was another weekend of only limited progress on the plane.  I worked through odds and ends here and there making only minimal progress.  A couple of orders placed to Vans and Aircraft spruce will allow me to move forward at a faster pace towards the end of this week.  I did run the starter #2 AWG wire and think I got a pretty effective run.  Using Adel clamps to secure it to the engine case and mount as it runs from the starter back to the starter contactor.   I also wired up the Tachometer opening cover I picked up from Andair.  Expensive thing for just a cap, but it was the only one around that allowed for safety wire..  Also, not pictured I torqued the starter which had been previously removed to fit the engine induction system and worked on the heat box which previously had been too far forward and was too close to the cowl.   Moving it back helps create the clearance necessary. 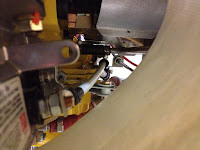 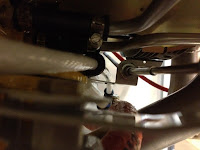 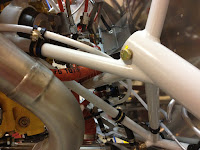 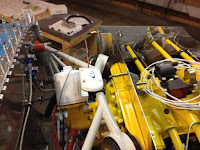 Also, I built a mount for the Dynon GPS antenna and plan to have it sitting on the top of the engine mount.  Others have done this with no heat impact and the fiberglass cowling doesn’t block the GPS signal in anyway.
Posted by Chad and Bekah at 12:03 PM