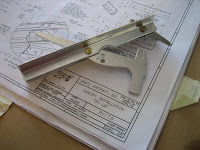 This was a fun piece of work.  I fully installed the canopy forward latch this weekend.  the latch comes punched but fairly rough job..  You have to straighten it out, and deburr like crazy.   Then cut some angles to house the latch which eventually get riveted to the forward pilot side skin.  The latch is really funny looking but works effectively.  You can open it from inside or outside of the airplane.  Its two parts and lock together when closed..  Some people upgrade this part, but I like the simplicity of Vans solution.

Once the latch has been roughly fabricated you use a template to start drilling in the side of the plane..  Drill careful here, you only get one shot at it..  Then you take it up to allow easy use of the die grinder to cut slots in the skin. 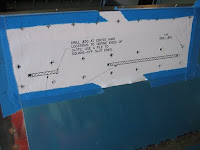 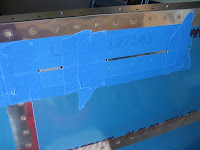 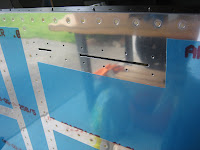 After the slot is drilled, you use some cardboard spacers to sandwich the latch mechanism in the angles, then the skin to match drill the angles.  After painted and primed, UMHV take is used between the angle and latch to allow for smooth operation without binding or scratching.

The handle arms slide through the slots and allow you to function it from outside the plane as well,but they tuck away nicely when the latch is closed.  From the inside you open the locking tab and rotate the latch rearward to unlock the canopy.  I will be building in the rear latch and push-rod that connect to this latch shortly. 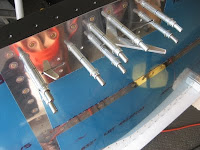 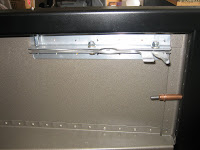