Bekah and I took the RV out of state for the first time over labor day weekend.  We took it way out of state..  Our first stop was Medford Oregon, just north of the Siskiyou Range (Mt Shasta).  Was a great flight, but 20 knot headwind the whole way.  At Medford we refueled and continued our trip to Santa Rosa, Sonoma County Airport.  Again with the 20 knot headwind, but all in all we still made it from Seattle to Wine Country in about 4.5 hours flight time.

Everything went really well with the flight except for two things.  In Sonoma it was 90 degrees and the canopy swelled up due to the heat and I couldn't close it.   WHAT?  I didn't realize that it swelled so much, the aft part was binding with the rear windshield.  I will work on sanding it down a bit more to get a larger clearance in that area.  We waited till it cooled down, and were able to close no problem.  Also, the CHT’s got a little warm as we were up at 9,500 over the Siskiyou’s passing Shasta.  The hottest I saw was about 389, no problem, but I am thinking I might need to open up the lower cowl a bit.   My 2 pipe heat box and 4 pipe exhaust kind of plug up the exit and I need more space for air to flow through.  I might put some louvers on the bottom of the cowl, we’ll see.  Also I think at similar power settings at higher altitude the air cooling isn’t as effective as at lower altitudes.

Coming home, that 20 knot wind had turned into a 30 knot wind, but this time was a tailwind!!   We were cruising across the earth at 220 mph most of the way.   This turned the flight home into a 3.5 hour event and even though we were delayed due to fog at Santa Rosa we still made it home by early afternoon.   We could have made it nonstop, but the plane is more efficient than our bladders.   Nature called around the Eugene area, so we stopped in for a quick pit stop.    All in all, what a cool trip ! 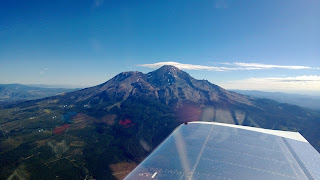